PGPA member Charles Francis has recently completed his eighth edition of The Cornish Garden, the annual Journal of the Cornwall Garden Society which is distributed to all CGS members in early March. It is a high quality, full colour, 72 page A4 production and this year includes articles by Min Wood on the Making of the Boconnoc Landscape (where the CGS Spring Flower Show takes place); Travels in Bhutan by Ned Lomax, head gardener at the NT garden, Glendurgan, who was sponsored by the Society for his fact finding trip to aid the improvements being carried out in the Bhutan area at Glendurgan;  Bob Brown wrote on finding Good Plants for Difficult Place in Cornwall; Jen Pina-Trengove, Gardener in Charge at the NT garden, Trerice, wrote about designing and planting the Ladies Garden, which is a beautiful new Knot Garden; Andrew Tompsett described the horticulture of his Cornish village of Illogan; Charles Williams of Caerhays and Burncoose Nurseries wrote about the daffodil hybridisations carried out by his grandfather, the famous J C Williams; Tricia Howard gave entertaining descriptions of the travels enjoyed by members on two CGS holidays to visit UK gardens. It also contains a tribute to Major Hibbert who was so instrumental in making Trebah the famous garden that it has now become.
The cover photo by Charles is of Cardiocrinum giganteum taken at night in the Jungle in the Lost Gardens of Heligan using the painting with light technique. When it comes to getting pictures like this, Charles is lucky enough to live in the Lost Gardens. He is also fortunate in having carte blanche to design and produce the magazine single-handedly wiithout needing to constantly refer to a commitee! 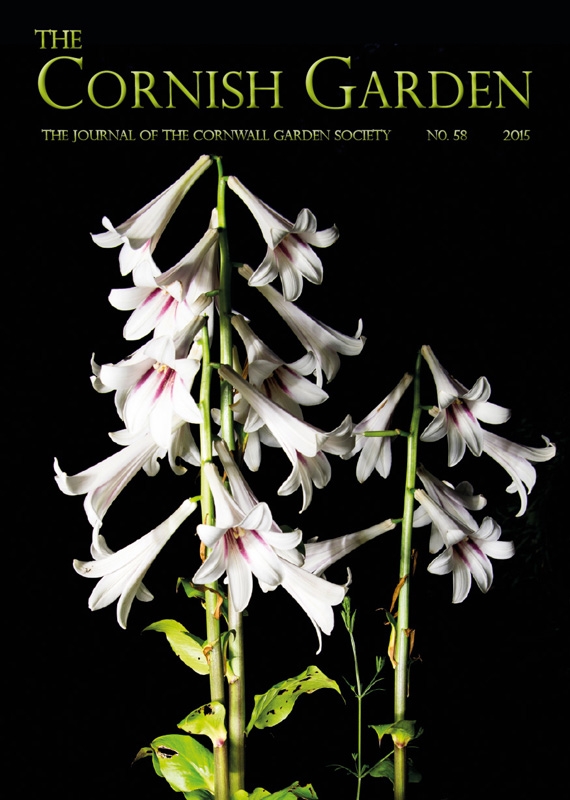